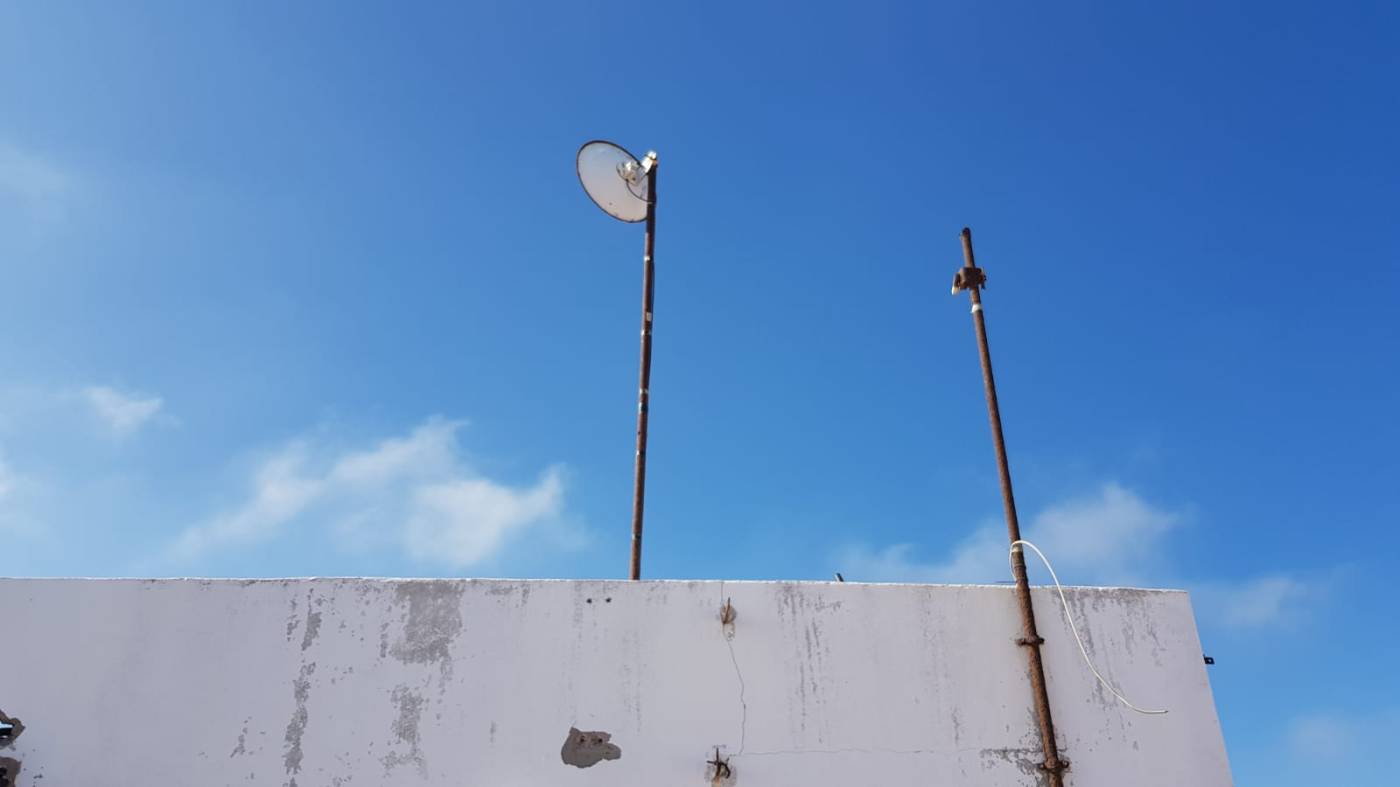 The work started at 10 AM sharp, and we arrived to another neighborhood that was surrounded by a small brick fence and had a really nice pool area. We started to install one security camera onto a lamp post, one student had to climb over a spiked fence to open the gate to the area, afterwards I held up the ladders while the other students climbed up to set the camera on a lamp post. No pictures, private property.

At first we were wondering what next, because there was an issue with the camera, upon further assessing of the problem, other students realized that the fault was in the black box, which real name never really came up since everyone just called it that, but to clarify I’m guessing it was some kind of switching power supply, POE switch maybe.

One of the other students climbed up a bookshelf to replace the black box, but the bookshelf almost fell, luckily we caught it in time and nobody got hurt.

We installed the box and all the cameras started working properly, the work ended, this workday was a short one.

After that, Oona and I enjoyed some more of Oona’s cookings.

Morning arrives and there is a weird bad smell in the room, but it’s not the end of the world so I just shrug it off and endure the smell zone.

The whole day I did the same thing with cat cables and antennas on the roof under the blazing sun, setting up cable on to the floors, walls and the roof. I burnt my hands a couple of times with the hot glue gun and made a mistake with the cable, I was trying to get the black cable through a hole on the wall and when it came out from the otherside, it turned out to be another/wrong black cable, so for some reason there was already another broken piece of cat cable inside the whole.

We glued the cable everywhere and tested if the antennas work while Oona and Jose configured them inside the house, eventually we got it right and wi-fi started working.

I kept today’s blog short because I had a headache and felt like I was having a heatstroke, but luckily I started feeling better after a few hour break from the sun.

No fancy pictures or stories about today because of professional secresy.

Today we set up 3 security cameras. We measured and I set up the black cable onto the building’s ceiling with the other students using ladders, sticky tubes, various plastic boxes and hot glue.

Most of the day went just trying to stuff the cable through some small holes on the walls, I also had to mess around with the screwdriver a lot. Basic installations.

I still haven’t touched a computer or gotten to learn more about setting up routers, but we’ll just have to wait and see. On other notes, I feel glad that the security camera system worked after our hard work.

First I headed to Calle la ballena to install and configure a router with Jose, he showed me how he took the routers mac address and connected it to pengdoplh’s own servers, it didn’t take very long and I headed to the next place.

A customer wanted internet connection, so me and the other students started cutting and setting up cat cable inside a tube inside a small metal wallpanel just outside her house in attempt to wire the cable to go into her house through an underground wire system.

We spent hours without any results, but finally managed to pull through, literally.

After that we set up the router with our selfmade cables and did a speedtest on it, the results were good. Then we received the payment from the customer and the other students promised to take it to the boss tomorrow.

Today I felt nice, I finally got to see how a router is configured, though the details are kinda hazy.

Oona’s meeting informed us that the saturdays at work are a must for one to keep their job at the company.

We received a message at around 10:30 asking for both security cameras, but we didn’t get them to work in the past but started trying to get them to work again now using my laptop, Jose’s broken laptop, Oona’s ethernet cable and several android apps.

After throughly assessing the situation, I used Fing to find the cameras IP addresses after connecting it to the router, after that tried to connect to it multiple times using internet explorer, but didn’t work and I came to the faulty conclusion that the problem would be the router firewall blocking all incoming connections to the camera.

We still tried some other ways like using other browsers and changing the pc’s IP, connecting through various apps, nothing worked.

Until at 15:50 it finally hit me, we needed to use both IP and software that recognizes the cameras and login to them.

Using IP camera viewer we got the cameras to work and everything worked like a dream. I got to do actual IT work, though I have a bad feeling it’s only a one time thing for me here.

I’m not afraid anymore, but to note everyone reading this, working here is still a serious potential health hazard because we lack any kind of safety equipment required by law back at Finland, and you aren’t very likely to land your dream job here since you don’t have a say at what you do unless it’s written on your job contract.

After regaining my usual self positivity from hopes of returning home a bit sooner than planned, I’ve seen what this place can do to one’s mentality as well as lifestyle. I’ve grown tired of suicidal jokes from my co-workers and boss using them as a motivator to them work harder.

But cons aside the location itself isn’t bad at all, this is a great place to have a tan and meet new people if you know any spanish that is. Fuerteventura offers a wide variety of tourist shops, restaurants and unique experiences to put it in a nice way.